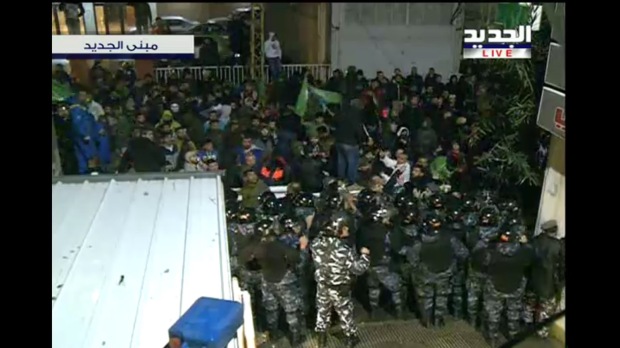 For the past two hours, New TV has been barricaded and attacked by “protestors” whose more accurate description is probably thugs, as they try to break into the TV station because, as far as they’re concerned, it broadcast something that offended them.

As part of its political satire program, Doma Krasiyé, New TV tackled the issue of the Imam Moussa el Sader who has been missing for the past 30 years. In doing so, they brought on them the wrath of some Amal Movement supporters whose political cover is so strong they dare go about and attack TV stations because their sensibilities were walked upon. Who else can do this? I can name one other party in this country who has the audacity to do this and not expect reperecussions.

So for the past few hours, those thugs have been attacking the New TV building, which has personnel working inside, with rocks and fireworks as they break down windows and doors in their attempt to break in.

Meanwhile, all of Lebanon’s armed forces are nowhere to be found. Their existence is as void as that presidential crisis we had for over two years, but yet again did you expect otherwise?

It borders on the comical. Our secretary of information reported that he had asked the protestors to listen to reason. Because you can obviously reason with testosterone-driven thugs whose entire moral compass is summarized with their sect and their political background.

It’s downright disgraceful that, slightly more than a year and a half ago, when protestors were doing so peacefully against the government’s inadequacy, they were met with rubber bullets and smoke grenades. I rememeber running through Beirut Souks, feeling like my throat was clenching up because of how barbarically we were treated.
Who remembers who ordered the attacks at the time? It was the exact same politician who has been sitting as speaker of parliament for the past two decades, and who was more worried about protestors standing symbolically in front of an empty parliament than about the garbage accumulating in the streets of Beirut.

Freedom of speech is holier than all of your politics. Your imams, your priests and patriarchs, politicians and holy figures, missing or wholly present are not above any form of criticism. If you’re annoyed or offended, as is your right, go ahead and protest with civility. Speak up as to why you are offended. But to have a knee-jerk reflex to trash and riot and attack is despicable, unacceptable and horrifying. What’s worse is that some of our politicians enable this as a form of muscle flexion.

Lebanon, parliamentary elections are coming up soon. We will never have a country that amounts to anything if we don’t vote for the change we deserve, a change that starts with politicians who do not harbor thugs and criminals to do their bidding at their will, and who have our entire security apparatus at their mercy.

Simply put: if Imam Moussa el Sader saw this, he would have disappeared willingly.

This entry was posted in Lebanon and tagged Freedom of speech, Lebanon, NewTV, Riot. Bookmark the permalink.