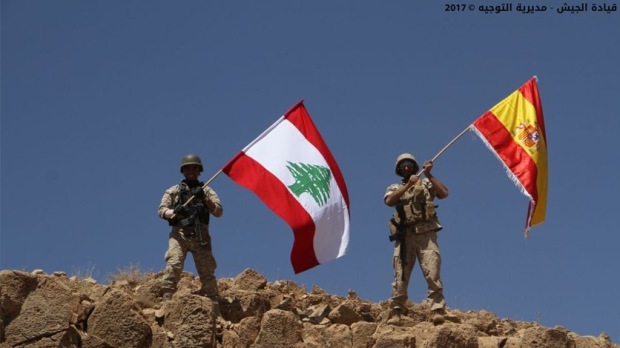 As Lebanon’s Army General Joseph Aoun tweeted the commencement of operation “Fajr el Jouroud,” which translates to “the dawn of the mountains,” Lebanon’s Army has started its full blown assault at the remaining entities of ISIS that are still plaguing the mountain regions of Al-Qaa and Aarsal, on Lebanon’s Northeastern Border with Syria.

I am confident that our army will be victorious. In only 24 hours, they’ve captured lands that were controlled by the terrorists and have planted their flag, as well as the Lebanese flag, on many hilltops that had been – up to that point – controlled by the cancerous entities that had tried to spread among Lebanese society without fruition.
This assault at ISIS in order to push them back from where they came and secure our Northeastern Border is a moment of triumph for the country against everything that ISIS is and that it has done.

In the midst of this assault on ISIS, Lebanon’s Army didn’t forget that its sacrifices and struggles against the terrorists are not only restricted by the borders of the country it’s fighting in. In fighting ISIS, Lebanon’s Army is going international in the fight against ISIS, and this is exemplified by the above picture of an army solider planting the Spanish flag on top of a liberated hill along with the Lebanese flag.

As such, this battle against ISIS in Lebanon is a triumph for the world too. It’s for the multi-national victims of those terrorist cowards in Spain. It’s for the victims of the attacks in Paris, Nice, Brussels, Berlin, Istanbul, and Egypt’s Copts. It’s a triumph for those people whose only “fault” was being of a certain country, at certain locations, of certain religions, of being people whose entire existence frightened those terrorists and their message.

I hope Lebanon’s Army plants more of our flags on more hills as they fully liberate our lands from such pests. I hope Lebanon’s people stay united behind the army in such tough and dark times, as we try to move forward as a country towards more secure borders, in synchrony with how important such measures are for the entire world.

One thought on “In Battle Against ISIS, Lebanon’s Army Pays Tribute To Spain’s Terrorist Attacks Victims”