Picture this, a song released over 3 years ago is suddenly noticed by the collective praying masses, and crucifixes are drawn. Picture this, a meme posted on a Facebook page lands you in court. It’s not a meme you even did.

This is what is happening with Mashrou3 Leila, the top Lebanese band that has been the prime representation of Lebanese indie music all around the world. They’ve been on world tours, selling out arenas across the world. Their latest highlight was a show at the prestigious Olympia in Paris, where people like Fairuz have performed before.

Except now, ahead of their August 9th concert, Mashrou3 Leila are not welcome in their own home country, on the very same stage of the Byblos Festival that helped propel their career forward around a decade ago.

I know I haven’t blogged in a while. But this is something that I felt is important enough for me to resurrect this space in order to shout, to whoever would listen or read, that this persecution of Mashrou3 Leila, in the overall bigger picture of our freedoms in this country being killed off on the daily, is a precedence we should not stay silent to.

The song in question, Djin, from their last-released LP, Ibn El Leil, references a baptism with gin in the name of the father and the son. That’s it. The meme in question was posted on Hamed Sinno’s personal facebook page was that of an icon in which the face of the Virgin Mary was replaced with singer Madonna. Hamed Sinno did not make that meme. He is not the first human on the face of this planet to make memes out of religious iconography, but for the Maronite archdioceses as well as Christian political parties, he might as well have been the first ever visionary.

It is to the background of a song and that meme that calls for bans of the band started up, and like an avalanche they kept rolling, with support from certain media figures and politicians. Even the Maronite Archdiocese of Jbeil had to weigh in with a statement of condemnation.

I believe the Christians’ problem with Mashrou3 Leila is not just about a song or a meme, which they want you to believe. It is inherently about the values that that band and its members represent. Hamed Sinno is the first openly gay artist of the entire Middle East. The band has been a forefront in LBGTQ representation in the region, and a view into the lives of Arab queer artists to the world. Their songs have been a representation of a Lebanese current that is not beholden to Christian or Muslim establishments. They represent a youth that is atheist, loud, proud, and trying to change a status quo that religious authorities are not comfortable with.

There, herein, lies the main problem. It is the threat that a band like Mashrou3 Leila poses to religious hegemony in the country that is so frightening to them, so they call to ban it. It’s in the same vein of a show being banned because a Muslim clerk decided it mis-represented the prophet. It’s in the same vein of the calls for bans that rise up every now and then for political reasons in the country. Haven’t you ever wondered why they keep happening often, and why we are hearing about these bans more and more these days?

I wonder, if Lebanese Christians are SO offended by a song or a meme, what would they do, for instance, if they are exposed collectively to a show like The Handmaid’s Tale, a post-apocalyptic Christian theocracy, where those same beliefs they hold so dear are challenged in the form of gross misinterpretation that turns anyone who is not male and white into a third class subordinate, where women are raped in the name of God and procreation, and where their fingers are cut off if they even read?

The even more baffling entity among all this is the sheer silliness and hypocrisy. I remember during the 2009 elections, one of the FPM’s main politicians posted a picture to Facebook with an icon of the Virgin Mary and in her heart, instead of Jesus, was Michel Aoun. Both iconographied-memes are in the same vein. Except one of the two will never face repercussions for his actions. 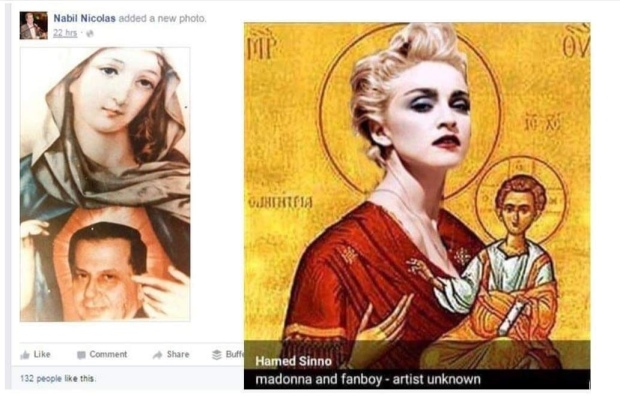 The amount of silliness does not stop here. The following is an actual post, by a priest, who decides that Leila in Mashrou3 Leila, in reference for night, is a satanic reference. He even uses a book he wrote as a reference. Of course, homosexuality is also ridiculed in the priest’s post, further reinforcing the point that the band’s queerness is under prosecution here too:

Even Carla Haddad, your favorite weather girl, decided to weigh in:

And – because this is the go-to insult for everyone these days – the band was even accused of being a Zionist propaganda machine, even though their latest song and video are clear condemnation of Israeli occupation of Palestine:

All of this is happening to the background of actual physical threats facing the band, and those who decide to attend the concert.

I think the culmination of it all was when Mashrou3 Leila were dragged to court because of a lawsuit filed against them for “offending religions.” While the judge dismissed the suit, she did not do so because it is Mashrou3 Leila’s right to sing whatever they want, or because the lawsuit itself was so silly. She did it under the condition of the band members meeting with priests, sheikhs, political officials from the Lebanese Forces and the Free Patriotic Movement, for them to issue an apology and to stop performing their “offensive” songs.

Today, the song Djin is no longer on Mashrou3 Leila’s official YouTube station. Of course, you can still find it online if you need to. After all, it is still 2019 even if some Lebanese mindsets are stuck in 1345.

But it is the precedence of this judge deciding that a band better be trialed in the court of public opinion that is harrowing. Our laws are not even made to protect us, our freedoms, and our voices. Instead, the judge allowed four young men whose talents have shone across continents, to be scrutinized by religious bearded men of the cloak whose boundaries have not extended beyond the 09 region, and by political figures whose names are not even relevant. Why? For the sake of sensibilities that are all too sensitive.

You see, at the end of the day, it’s all quite simple. If your religion and belief cannot withstand something as trivial as a song, a meme, or a pop culture moment, then that says more about your beliefs and faith than about what you’re offended of.

Irreverence is a sign of modernity. With every ban, every example of the Lebanese state failing us, every call for censorship just because someone is upset, I am convinced day in and day out that the country I left years ago is in full blown reverse gear and heading backwards, as far from modernity, as possible. Our country is being killed every single day by these religious men who are offended at everything. How long will it be before our breathing space is further extinguished, I wonder?

16 thoughts on “From Mashrou3 Leila To Our Freedoms: Religious Censorship in Lebanon Is Killing The Country”