With each passing day, news transpiring out of Lebanon get more and more disheartening as the latest seems to be a wannabe “comedian” deciding it’s time for him to start a “conversion therapy group” for gay people in the country.

The comedian in question is Charbel Khalil. I forget when the last time this man dabbled with relevance, but he wants to be in the spotlight again as he launches hocus pocus, unethical and unscientific torture methods under the guise of his namesake saint.

In a series of tweets, Khalil announced his intention to quick start the “St. Charbel Project” to “help” gay men and women to get rid of their gayness. As he got criticized, he then amplified his homophobia by blocking anyone who opposed his message, calling them pejorative words and doubling down on his message. You can find his tweets here: 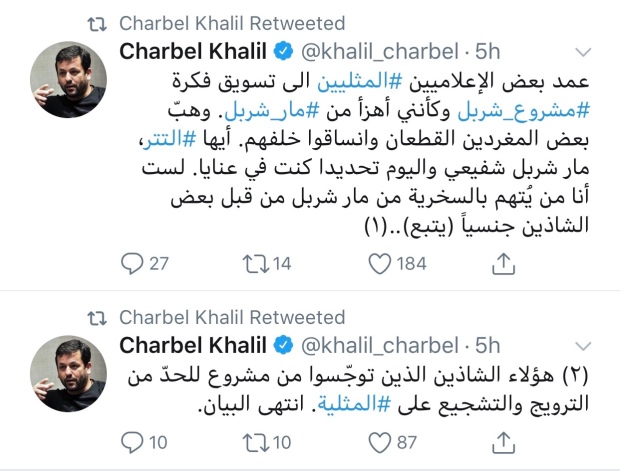 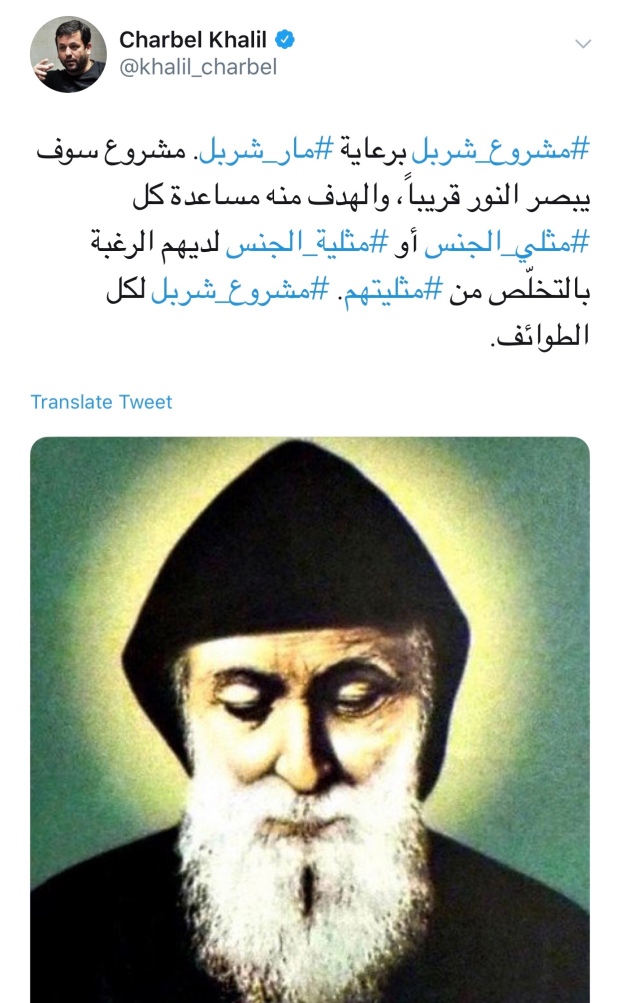 Charbel Khalil’s feeble attempt at relevance is something that has been deemed by scientists as inhumane, barbaric and obviously useless. The mere fact that, in 2019, something like this could be allowed or even started when any respectable scientific body has stopped recognizing homosexuality as a disease for around a lifetime, is horrifying.

It’s another step in that downward spiral of a country that is fast circling the drain in all the ways that matter.

You see, what Charbel Khalil is proposing is a violation of basic human rights. People will applaud him, because at a time when a lyric can upset millions, basic decency does not even register.

What Charbel Khalil wants to do is an affront to anything that is scientific and logical. But that’s not the kind of thinking people like him and those who like him dabble in. They’re probably the same kind of people who think global warming is a myth as their face melts off in the July heat.

And let’s not even forget that what Charbel Khalil wants to do is an insult to the saint whose name he’s plastering on his crime.

Ladies and gentlemen, this is not a laughing matter. I pity the LGBT people who will fall victim to this man’s actions because they live in a country that has permeated the notion that their sexuality and their being cannot coexist. Live and let live does not run in Lebanon circa 2019, looking more like 1472. How could they when they want to police how you pray, what you watch and listen to, and now how they think they can control your body’s urge to love?

I pity the children of these many figures who may one day end up gay, only to face the insurmountable rejection that is their own family denying them a safe space, in a Country that is anything but.

Today, what those tweets constitute is another nail in the coffin of the hopes of a modern Lebanese state. From attempts to ban Mashrou Leila, to now kick-starting a practice being banned everywhere in the modern world, how low do we want to sink?

From a failed economy, to a failed state, to failed freedoms and now to failed basic human decency, I wonder where Lebanon’s rock bottom will be?