Congrats fellow Lebanese who might read this, we now have a government.
Regardless of its unipolitical color and the 5 month labor it went through to get here, we can now say that we are no longer governmentless.

And since 5 months without government render you immune to the overall uselessness of the whole process, let’s all deem the government formation a big fat fail.

1) It is a one-sided government, meaning the political struggle between both sides in the country was irrelevant to its formation.

2) It took 5 months for people among the same “team” to agree on forming the cabinet. 5 months for them to agree on 30 names. It took less to form the government with both sides included after the 2009 parliamentary elections.

3) The former opposition calls upon itself reform and change. Change is there: I’ve never heard some of those names before. And congrats to those new ministers. They will have a constant monthly paycheck till the day they die. Also, congrats to those people that made the governmental selection yet again. I mean, could you imagine a government without Ghazi Aridi as the minister of public works? Hello no! Reform, indeed.

4) There are more pro-Syria ministers in the new Lebanese cabinet than there will be in the theoretical Syrian government to be formed by Bashar Assad in Syria.

5) A few hours after the announcement of this glorious formation, two ministers have already submitted their resignations. Were they not aware they were going to be assigned? Apparently not. What’s the word (or acronym) to say here? Yes, LOL! Quoting my friend Boulos, “civil war cabinets have lasted more than this!”

So yeah, let us be happy today that the orange, yellow, green and other irrelevant people found it in them to stop the cockfight and form a government. Useless as it is and contradictory as it may be to the will of the people, we now have one. Insert fireworks show. 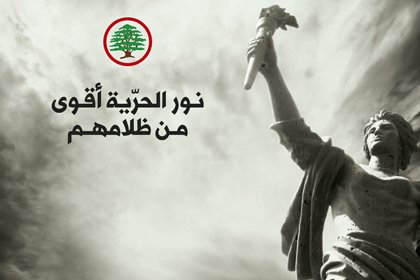 On April 2nd, the Lebanese Forces commemorated the party’s disbanding.

As part of the proceedings, many people spoke about the importance of this party in the lives of many Lebanese and its vital role in the many years that it has been active. I will not go into those speeches, but they were very engaging. At one point a priest told a story about a woman who asked to go into a solitary cell at a convent. Three days later, she came out and told this priest how horrible those three days were and she wondered how the Lebanese Forces leader, Samir Geagea, could handle staying in worse conditions for more than seven years at the time. Geagea ended up being imprisoned in solitary confinement for over 11 years.

The Lebanese Forces have always been a highly organized party, as evident by their many events and the acclaim they get based on their level of organization.

However, that’s not where they’re pioneering. After all, many other parties in Lebanon are highly organized, albeit in a different way.

The Lebanese Forces are set to become the first party in Lebanon where the base elects the party’s leader. And that to me, is pioneering.

END_OF_DOCUMENT_TOKEN_TO_BE_REPLACED

As I’m writing this, everything is going haywire in Tahrir Square.

Egyptians have cracked. They are no longer a united front.

Blame it on whoever you want… money, poverty, Mubarak’s influence… it all comes down to this: Change has been betrayed.

I was honestly optimistic that Egypt would be the major catalyst in the reaction of change in the Middle East.

I remember a very wise Chemistry professor at AUB telling me, when I attended class amid the May 7th protests in Lebanon, about one of his visits to the Arab League Summit.

He was sitting there and a man approached him and told him: “Who’s the odd-one in this group of leaders?”

My professor looked at him questionably. The man answered, “Amin Gemayel”, the Lebanese president at the time.

“Why’s that?” my professor asked. The man replied: “He’s the only one who won’t be here in five years”.

This little story shows how it’s all been the same since the 1980s in this region: same people governing, same people doing the same things all over again. This region needed this reaction of change.

But with one speech from one of those people, everything went wrong. The catalyst is now working for the reverse reaction: status quo.

This is where we are heading back. Mubarak has definitely showed other leaders around the region what he’s capable of. He single-handedly contained a massive two-million-plus protest in one day and reversed everything it did.

People in Egypt are now fighting each other. Molotov cocktails are being thrown, bricks from the roads are being torn apart to be used as projectiles, bricks are being thrown from rooftops, boiling water being poured on protesters… a massacre is starting on the streets of Tahrir Square. The army is apparently beginning to fight the protesters. Activists are being hit with rocks. They are bleeding on the streets. Nurses and doctors are nowhere to be found. Even Anderson Cooper was punched in the head 10 times. Thugs are infiltrating the peaceful protests and a bloodbath is forming.

My Lebanese friends are reporting that they are afraid for their lives now. They are trying to escape but the army is blocking all the exists. The protesters are surrounded. There’s no way to go. I am afraid for them and I can’t even begin to imagine the fear they must be feeling right now. What civilized country in the world turns protests into an event where your life is threatened? Into an event that is slowly turning into mass-killing?

And for what? for this man, who contrary to what he announced yesterday, is still, 30 years later, starving for even more power. Mubarak, you are a coward. You are not a man. A man would respond to his people’s concerns. He wouldn’t resort to killing those who rise against him. He would hear what they have to say. You are not worth of your country. You are not worthy of life.

And the ironic thing is… what will tomorrow’s headline be?

What will the American stance from this be?

We support whatever the Egyptian people want

And where will the Egyptians be? Either dead on the streets of Tahrir Square or back in their stinking poverty.