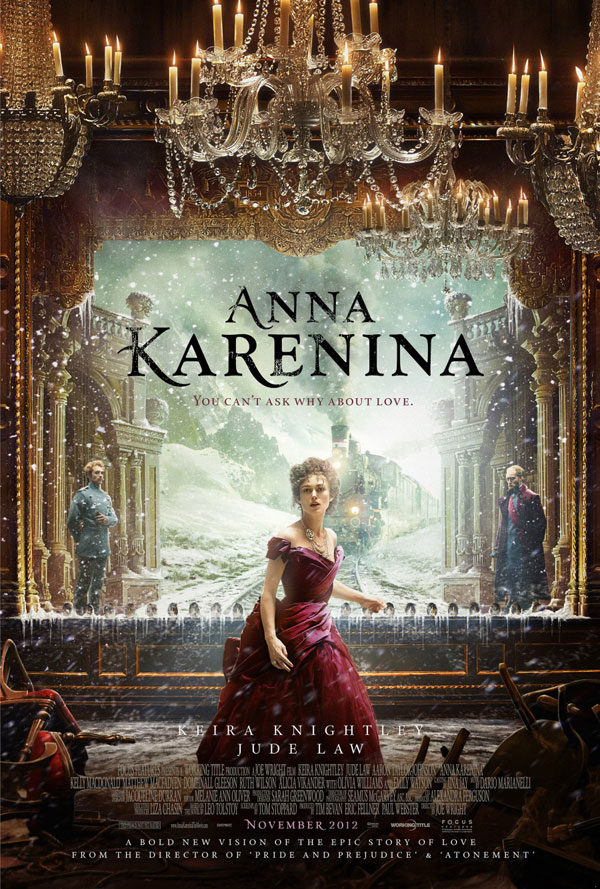 Joe Wright, the director who gave us “Atonement” and “Pride and Prejudice” tries his hand at one of Leo Tolstoy’s most popular novels and does so by going bold via a new cinematic vision that’s never be done before.

Anna Karenina, the story we all know of the woman who after being tormented by an uncaring husband seeks companionship in a much younger suitor, is given a fresh approach in Joe Wright’s version. The movie has a theatrical aspect that is most definitely quirky. If you are able to get past the weirdness of it, Anna Karenina will prove to be a highly enjoyable movie. If not, then it’s two dreary hours for you.

Keira Knightley gives a great performance as Anna and is definitely helped by the setting the director envisioned for the movie. She brings a ton of sensuality and sexuality to the table, as she has previously done with similar period pieces. Her best scenes, however, are as much a product of her own acting chops as they are of the art direction, camera angles and whole vision. Newcomer Aaron Taylor-Johnson, whom you’ve probably seen before in Kick-Ass and Nowhere Boy, gives a terrific performance as Count Vronsky, Anna’s younger lover. His performance is definitely years older than his young age of 22 and he delivers the right amount of emotion and subtlety that the character requires. Jude Law is almost unrecognizable as Anna’s husband Alexei Karenin. His role, however, borders on the irrelevant at times due to his grossly underdeveloped characters and that’s one of the major flaws in this adaptation.

Joe Wright’s Anna Karenina, while visually enchanting, is flawed when it comes to character development. If you haven’t read the book, Anna’s movie character comes off as a bored housewife whose husband couldn’t satisfy her anymore while, in fact, it was Anna’s husband who drove her to cheat on him but constantly shutting her out. This is not portrayed in the movie. Alexei Karenin is shown as a near saint who can’t understand why his wife would cheat on him and who’s ready to forgive her despite all odds so that by the time the end credits roll, your sympathy towards Anna, the movie’s main protagonist, is next to none.

This adaptation of Anna Karenina is fresh and energetic, risky and ambitious but it’s more about image than it is about content. What Joe Wright did was infuse some sense of modernity into this nineteenth century tale which might get it to connect with a younger demographic that’s not all too willing to read the keystone-sized book. Anna Karenina is one of the most visually inventive movies of the year and despite that taking out some substance, I was still taken away by the world portrayed on screen. However, all in all, the movie is nothing short polarizing, starting with Wright’s new take on the art direction to the way the screenplay was written, culminating in the finished product as a whole. I personally really liked it – but I can see why others would absolutely hate it. Anna Karenina is a movie that seduces you but ultimately fails to break your heart as the ice-cold train wheels break hers.