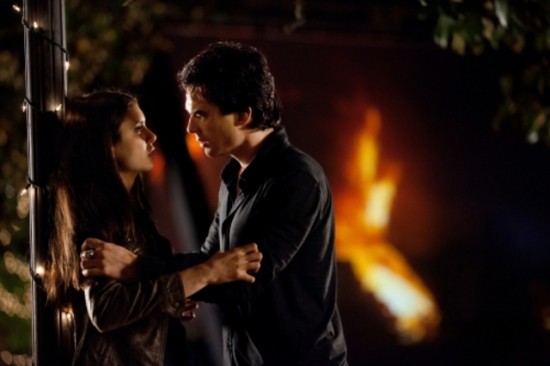 What do you do when you’ve lived for over a century, done all the mistakes imaginable and now suddenly, you find yourself dying?
How do you absolve your mistakes and ask forgiveness from the people you love most, whom you have hurt deeply? What exactly does a man do knowing he’s about to die?
This is the theme of the season two finale of The Vampire Diaries.

Taking it a notch down from the epic penultimate episode, The Sun Also Rises, this episode, grimly titled As I Lay Dying, is almost as epic – albeit being totally different. Leaving most of the supernatural elements to the previous episodes, the creators chose to make As I Lay Dying an episode about the redemptive power of love, regret, strength and courage. It is heartfelt, it seeks closure and at the same time opens up some of the wounds the show’s characters have been trying to hide for many years.

All of the story-lines are well-developed, in pure Vampire Diaries fashion. I would have liked to see some more stuff going on (maybe extending the episode beyond the one hour mark) but that’s just greedy me talking.

There is no other show that does cliffhangers better than The Vampire Diaries. And this season’s cliffhanger is almost as awesome as season one’s finale. It was absolutely smashing. Not only will it leave you in shock, it will also instill the feeling inside you of “how the hell am I supposed to wait till September for this?” It actually makes one of the less important characters vital for next season!

But wait is all we can do. The Vampire Diaries is not perfect. But the speed with which this show moves is what keeps you immersed, add to that the highly interesting storyline. Season three of The Vampire Diaries is said to be the “year of the originals” and this episode sets the mood for that. And let me tell you this, it will be one brilliant season! Don’t let the feeling of wanting something to happen and it not happening deter you from enjoying this awesome TV show.

Those who know me are well aware that The Vampire Diaries is, currently, my favorite TV show – by far. It combines all the elements that I like in a TV show: suspense, twists, shockers and a fantasy storyline.

I hadn’t blogged before about The Vampire Diaries because I didn’t know what I was supposed to write. After all, you can’t really write a synopsis of the show without giving too much away and you can’t review episodes because they would contain spoilers.

But don’t worry, this is pretty much spoiler free.

The latest episode, aired yesterday, of The Vampire Diaries (titled “The Sun Also Rises”) is one of the most epic TV episodes I have ever watched. It is an episode that doesn’t let down for 45 minutes, constantly escalating an already red-alert level storyline. You are basically taken to adrenaline stratosphere level – and no, I am not exaggerating.

This could have easily served as the season finale. It had everything you could ask for as a conclusion to a TV show season. But it’s such a big episode that the writers probably thought the viewers would be morally scarred if they left the season at that. After “The Sun Also Rises”, we need some form of resolution.

But “The Sun Also Rises” starts setting up the pace for season three. And by the looks of it, it will be even better.

Finally, have you ever watched something and it got so stuck in your head that as you walked around and remembered parts of it, you basically got goosebumps? That was me today as I headed towards an exam and the only thing I could think of was how epic the episode was. And yeah, I basically aced the exam also.