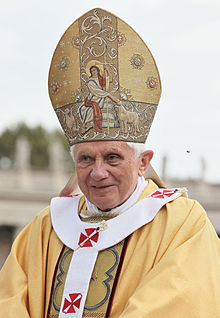 The September 14-16 visit of pope Benedict XVI to Lebanon is no longer set in stone and might be canceled at any moment, as reported by Naharnet. (Source).

The reason for that? The troubling situation in Syria and whatever effect it might have on the security of Lebanon.

The last Papal visit to Lebanon was in 1997 by John Paul II. Back then, the Syrian army roamed free in most of Lebanon and the Israeli army occupied the South. However, that didn’t deter the late Pope from coming in to see his people, who had been waiting for such a visit in persecution for a long, long time.

If Pope Benedict XVI ends up canceling his trip, I’ll be disappointed because of what such a cancellation represents: the fear of a Pope for his own life, when in reality there’s no threat, more so than the lives of the people he’s supposed to be visiting.

What a Pope’s supposed to do isn’t hide away behind security pretentiousness and actually visit the congregation that doesn’t have that prerogative and who has been through ordeals upon ordeals, partly because of the faith of which he’s the current “reference.”

The sad part is the pope actually visited Israel, Palestine and Jordan back in 2009. I guess there are no security concerns in Occupied Palestine. None at all.

A Vatican high-horse is better than Lebanese hole, apparently. Truly inspiring from the Pope. I feel more Christian already.

7 thoughts on “The Pope Might Cancel Lebanon Trip… For Security Reasons.”