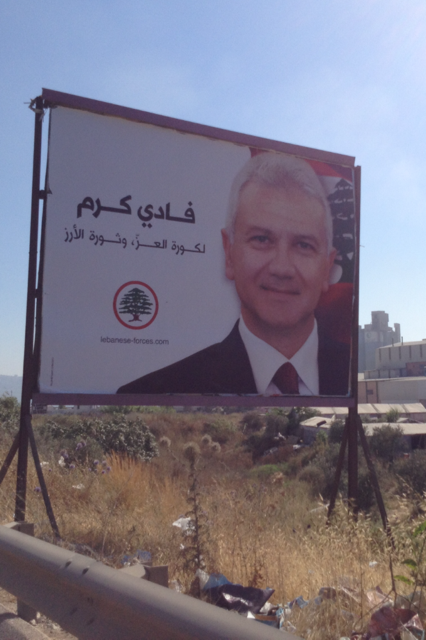 In about 7 hours, the citizens of the Northern caza “El Kourah” will head to the polls to choose between basically two candidates: Walid el Azar (SSNP) and Fadi Karam (LF) to replace Farid Habib (LF) who died back in May.

This isn’t the first time I write about this issue. A previous post of mine dealt with the SSNP’s serious lack of understanding of the basic elements of the democratic game with them turning the whole elections into a matter of life and death only because the LF nominated someone from a place they consider as their “fortress.”

On Friday, LF leader Samir Geagea held a press conference during which he declared that voting for his candidate means voting:

– For the Lebanese state.

– For the improvement of Kourah as a caza.

– Against Bashar el Assad and his regime.

– To overthrow the Syrian regime.

Sorry Mr. Geagea but your electoral rhetoric, while enticing, is simply full of it. A person casting a ballot for Fadi Karam won’t lead to the Syrian regime crumbling. An extra MP for the LF won’t change the balance of powers in the country. It won’t lead to a brilliant future nor will it change the fortunes of the Koura Caza.

It’s understandable that political leaders need to charge up people before heading to the polls for maximum results. The sad thing is people believe this.

On the other hand, the SSNP is still beating around the same old story: the LF are threatening our existence in an area that we’ve historically been the strongest in, etc…. That is also useless.

The fact remains that the Kourah elections will not change things. It will not do anything worth mentioning except have the party that wins celebrate for a few days, declaring how the tides have “turned.”

The clearest proof to that is both Farid Mekari and Nqoula Ghosn (the caza’s other two MPs) maximizing their electoral machine’s yield to help the LF candidate. They want to prove that they exist, that they can bring out the vote and that they should have a say in what happens in 2013.

How many people will vote tomorrow fully thinking it’s a vote against the killers of Bachir Gemayel, against the allies of Bashar, against the allies of America and for their own view of the Lebanese “state”? I would assume the absolute majority. Will anything change come 2013? I hardly think so. I can imagine the slogans from now. Depending on whether the Syrian regime falls or not, they will range from votes against Bashar and the Islamic state in Lebanon to votes against the zionist agenda and against corruption.

But the truth remains that those claiming change and reform haven’t done that one bit. And those claiming fighting for freedom are as powerless as the poor Syrian children getting massacred in their homes. Who cares, though. Let’s go vote. And win. And celebrate. And live in bliss. And then realize that we’ve accomplished nothing.

Did I mention you should vote for Fadi Karam? Yeah, I get to bring out the vote as well. Shou we2fet 3laye?