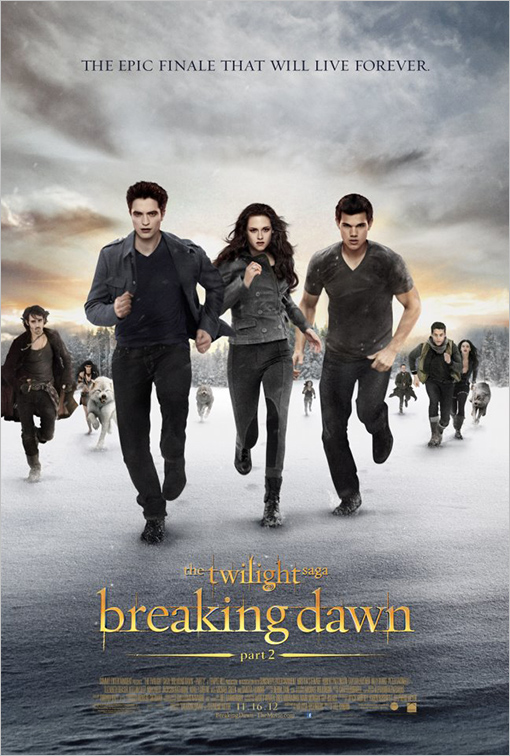 When it comes to the Twilight series, both the books and the movies have been, umm, less than stellar. The pages that I read way before the first movie was even released told a redundant story that has affected the genre it discussed negatively and the movies took it upon themselves to worsen it even further. The story is so concise that I managed to tell the few thousand pages to a friend in one paragraph. If that’s not a concise summary, I don’t know what is. When it comes to the final Twilight book, any reader of the series can attest that there’s almost nothing that happens in it – or at least in its second half – so the decision to split it into two movies was purely for commercial reasons, which is very obvious.

One thing to say about Breaking Dawn Part 2 though is that, while it is still a weak movie as far as movies go, it’s well above the average for a franchise that has become synonymous with cheap quick money… and it’s also much better than its corresponding half of the last book installment in the Twilight Saga. Much better actually, which goes to show exactly how good the book was.

Bella, now a vampire, is adapting to the changes that her condition imposes. But she has uncanny self-control, enabling her to run away from human blood even on her first hunting trip. The daughter she almost died giving birth to has grown immensely in the two days during which Bella underwent her transformation. And her daughter keeps growing before her… until a vampire sees her and reports her to the Volturi, the council governing all vampires, as an immortal child: children turned vampires, which are also illegal and cause an automatic death sentence on their maker. So the Cullen clan starts preparing for a final showdown against the Volturi, asking for the help of anyone who could listen.

The script of Breaking Dawn Part 2 is mechanic. The acting is robotic. The direction is fill in by numbers. The actors give these looks that try to penetrate into your soul way too many times, eventually ending up becoming just awkward. Kristen Stewart is better as Bella in this movie than she has been in the previous ones. She actually smiles… more than once. Rejoice, maybe? Robert Pattinson still looks and sounds constipated in every single scene he acts. Taylor Lautner is still here only to get the girls in the theatre to scream at the sight of his abs. He shows them once, for the record. But you’re not here for their acting, which is more often than not borderline comical.

The score by Carter Burwell, on the other hand, is pleasant to listen to. The departures the movie takes from the book are also quite shocking. That’s probably the only reason why I left the movie feeling that it wasn’t all too bad. So for readers of the books, prepare to be positively surprised as well as shocked towards the end.

As the movie opens worldwide tomorrow, almost everyone will draw a sigh of relief as this part of cinematic history comes to a close. And what a [insert any derogatory adjective you want] chapter it has been. However, for such an underwhelming and depressingly horrible movie series, Breaking Dawn part 2 ends it with a bang – or as good as a bang that could be for the standards that Twilight has set for itself. The series’ die-hard fans (or twihards as they call themselves) will be happy with it.