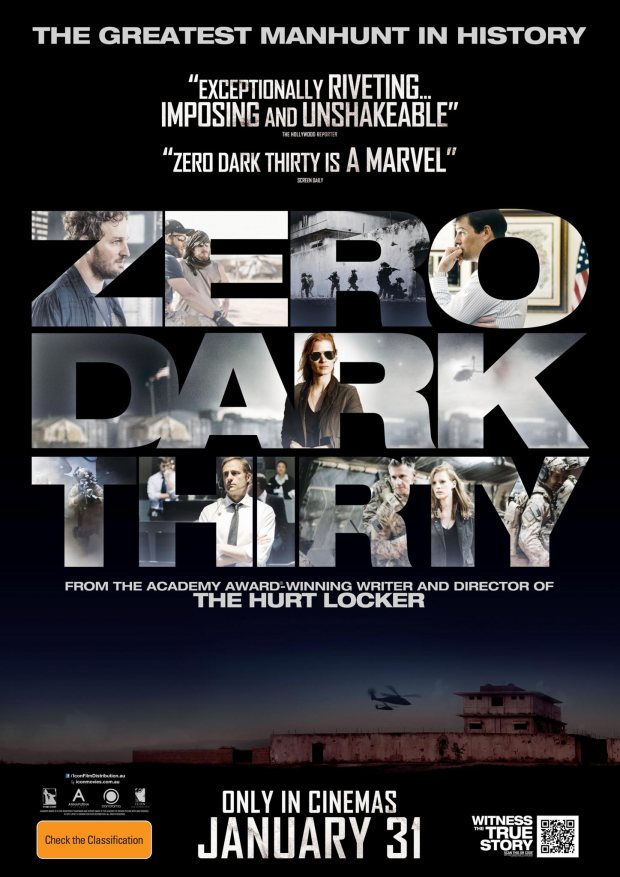 Here it is. Arguably the most challenged American movie of the year (a recipe for those little golden statuettes): Kathryn Bigelow’s Zero Dark Thirty. U.S. Senators of both parties came out against the movie because it portrayed the use of torture in many of its scenes in order to extract information about the whereabouts of Bin Laden. You know, because the CIA surely did not use torture. Ever.

Zero Dark Thirty is the story of CIA agent Maya (Jessica Chastain) on her pursuit of Al-Qaeda leader Osama Bin Laden over the course of a decade. The torture methods her agency employs, which include but are not exclusive to food and sleep deprivation and waterboarding, lead her to a man called Abou Ahmad Al-Kuwaiti who, for every single non-idiot person out there, obviously comes from Kuwait. Except it’s not as obvious for the movie’s CIA agents who spend more than an hour of the movie’s 157 minutes running time on a manhunt before realizing that – GASP – Al Kuwaiti means he is from Kuwait. As they search for Osama Bin Laden’s main means of communication with the outside world, these CIA agents are faced with people who don’t want them to succeed leading to terrorist bombings in CIA headquarters, of fancy hotels, of different capitals around the world and a lot of exasperated agents who can’t fathom how they would be targeted as such.

It seems the dreadful The Hurt Locker did not satisfy Kathryn Bigelow’s appetite for American neo-political-military-award-magnet-dramas. I mean, why wouldn’t she tackle the same theme in one way or another all over again to become the first female director to win best director at the Oscars twice? Therefore, Bigelow is at it again. And Zero Dark Thirty includes not only every single thing I hated about The Hurt Locker but much, much more as well.

Jessica Chastain’s character Maya is definitely unlikeable. I hated her character to the extent that I couldn’t even appreciate her acting performance. She came off as grating, whining, overly melodramatic at times especially in a shouting scene with a CIA chief in Pakistan when she asks for extra man power in a man hunt that had been proving futile at that point. However, this type of performance is definitely the type to draw in award-voters: a charismatic female character at the heart of a male-dominated institute in the midst of the hunt for the world’s most wanted man? I can hear those voters orgasming already, which is a damn shame because if she ends up winning, she most certainly does not deserve it. Her strongest scene is right at the movie’s end as she silently reflects on the end of this decade-long era of her life. But even that scene’s potency isn’t enough.

One thing to say about Zero Dark Thirty, however, before I start grilling it is that Bigelow does well directing the movie from an “artistic” point of view. Some sequences are very well filmed, especially the raid on Bin Laden’s compound, and the movie is very technically proficient. However, a political movie like Zero Dark Thirty necessitates a politically oriented review. So here it goes.

Zero Dark Thirty is an insult on your intelligence. If there’s any movie which will get you outraged at its inaccuracy, it’s this. As a movie which wants to give itself authenticity by going the whole mile and asking you to “witness the whole truth,” it only comes off as mass propaganda about how the CIA is making the world a better place just by them being there and it portrays all those filthy Arabs living in these parts of the world as the scum of society: Muslim terrorists who can’t wait to blow up some Americans.

As they hunt for Abou Ahmad Al-Kuwaiti in some Pakistani city, the CIA van is stopped by Pakistani men. One of the Pakistanis driving gets out of the van in order to reason with the armed youth. “Shou ya chabeb?” he asks them in arabic – levantine Arabic no less – for: what’s up guys? A simple wikipedia search would have told Mrs. Bigelow that Arabic is, in fact, not spoken in Pakistan or any -stan ending country. But why would she care? Arabic-language, terrorist, Pakistan… it’s all the same for her intended audience. In fact, the movie’s scenes in Pakistan feature less Pakistani than Arabic, which is odd and definitely not “witnessing the truth” or as American critics are saying: “a movie reveling in keen detail.” Since when do Pakistanis speak Levantine Arabic?

The use of Arabic in the movie doesn’t only stop at Pakistan, it extends to various interrogation scenes where someone has to translate to Chastain’s character what the man is saying. Fair enough.

As one of the CIA agents sets up a meeting with a supposed worm within Al-Qaeda around Christmas time, she is found talking to Chastain’s character about baking a cake for the man to which Chastain replies: “Muslims don’t eat Cake.” Really? In fact, the entirety of Zero Dark Thirty doesn’t even bother to draw the line  between a religious extremist and a Muslim: it gets the boundary between the two to be so blurred that it’s so easy to confuse one with the other, making the entire movie not only highly stereotypical but highly nauseating and shallow as well.

For an American viewer, Zero Dark Thirty is definitely fascinating and I was even taken by its earlier scenes before the rhetoric started. American movie critics who don’t understand the other languages spoken in the movie and don’t have the ability to tear the movie apart from a non-cinematic perspective won’t care about the aforementioned points. Arabic, French, Pakistani – who cares? American movie critics believe that the way the hunt for Bin Laden was dramatized is chilling. They believe that the movie is politically non-biased. For those of us who can actually read into Bigelow’s Zero Dark Thirty, it only comes off as severely culturally-inaccurate and offensive.

Bin Laden was a bad man. He killed a lot of innocent people and I’m glad he’s dead. The CIA and whichever other intelligence agencies that helped the Americans to catch that filth of a man need to be commanded for their job. But this movie is not the way. Zero Dark Thirty wants to be the definite movie about the Bin Laden manhunt. Bigelow wants the honor of being the first and last director to tackle this issue. But that is far from the case. Again, while technically proficient, the movie is not perfect. It is too slow at times and at other times, when it moves, it is only like an arthritic ninety year old man. The first twenty minutes of torturing a Saudi are chilling to watch. They are followed by almost 90 minutes of scenes that might as well be considered as an antidote to insomnia before delivering again with the Bin Laden killing scene.

By aiming to be technically proficient, Zero Dark Thirty undercuts itself by becoming emotionally detached from the material it’s trying to portray. By showing torture scenes that more often than not lead to no-tactical results, the movie is amoral. By turning the entire struggle of all of 9/11’s victims, as it starts with real-life audio from the twin towers on that horrible day, into a vehicle for Chastain and Bigelow to cash in on some rewards, the movie is also despicable. By portraying every single non-American aspect of the movie in such gross inaccurate ways, Zero Dark Thirty is horrendous. Zero Dark Thirty is, eventually, over two and a half hours of pure propaganda that is not only offensive to the memory of the Americans who died on 9/11 but to a lot of viewer’s mental capacities.

You know what’s common between Bin Laden and Zero Dark Thirty? They are both horrifyingly bad and an abomination to existence.