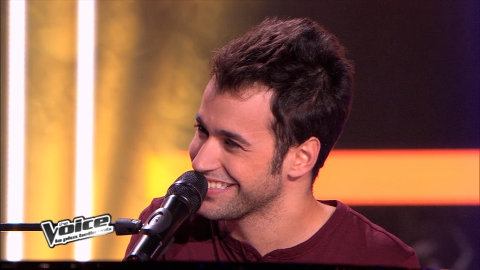 Young Lebanese musician Anthony Touma took it to the stage of France’s version of The Voice – titled in typical French as La Plus Belle Voix – to become the first candidate of the show’s second season that gets the approval of all four judges, causing them all to turn their chairs to face him signaling them wanting him after his rendition of Michael Jackson’s Billie Jean. He was even introduced as Lebanese, his nationality front and center.

Apparently Anthony Touma had attempts at breaking into the Lebanese music scene but they weren’t very successful which caused him to leave the country to France where he pursued the dream. He is now the second Lebanese to be on the show after Johnny Maalouf (link) almost reached the quarter finals last year.

I will update this post when I stumble on a video of the performance that is functional in Lebanon. If you are in France, this will work for you (link).

However, as a testament to how good Anthony Touma was, he trended on Twitter in France minutes after his performance: 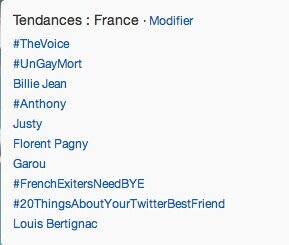 And he eventually trended worldwide on Twitter as French people spoke about him him and Lebanese people gushed over how proud he made them:

I’m really glad that Anthony got his break into the music business, something he would have never gotten had he stayed here. He now joins a long list of Lebanese shining abroad, bettering our image as a people and making us proud with what they do (link).

This entry was posted in Lebanon, Music and tagged Anthony Touma, France, La Plus Belle Voix, The Voice. Bookmark the permalink.