When I spent a month in France, back in August of 2012, I was somewhat surprised to find most people there had some gross misconceptions about Lebanon. I had thought that French people out of everyone would at least know slightly more than your average info about this country in the Middle East. But it was the same thing all over again: desert, camels, tents, oil, everyone is rich, etc…

It was grating at first. Then it became amusing. There was really nothing I could do to change what those people thought of me or my country or everyone who had my passport. It’s not only the French, it’s basically everywhere else as well. And we try to pretend as if the stereotype isn’t there but kidding ourselves is all we do.

I’ve been pondering for a while over why is it that the Lebanese candidate Anthony Touma on France’s The Voice managed to instill a sense of nationalism among us, one that doesn’t necessarily reflect the same way by the French over the French candidates on the show.

In more general terms, because Anthony Touma isn’t a lone example, why is it that we cannot not be proud of the Anthony Toumas of Lebanon, no matter how hard we try and knowing that they may not be the absolute best at what they do? Why do we feel wronged when they get wronged? Why do we, as Lebanese, feel involved in what they do and what they accomplish fully knowing that the benefits they reap don’t reflect on us in any way?

I am not the type of Lebanese people who gush over the Shakiras and Salma Hayeks who never set foot here and yet some people feel obliged to try and get them to identify with us.

But when I look at Anthony Touma, Amin Maalouf and others, I see people who are like me, who lived my life, who probably went to schools similar to mine, who walked the same streets that I walk everyday and who are doing the best they could with the talent they have.

The Anthony Toumas of Lebanon are the people who, with each word they write or each note they sing, give a better image of our country than we could ever do. And some might believe we don’t need that. But we do. We terribly do.

For many, those prospects are never self-fulfilled, which is okay. We are not all given the same chances in life. But when we look at Touma, Maalouf, Gebran, Nadine Labaki, etc… We see people who are trying to make it or have made it. And they give us hope. And those people who walk and talk and think like us make us proud.

There will come a time, hopefully, when we no longer feel we have something to prove to the world. Perhaps our sense of nationalism towards the Anthony Toumas of Lebanon lessens when that time comes. But until then, there’s nothing wrong with feeling proud of our countrymen who represent us despite everything and represent us well.

Or you can hate on them because feeling proud of someone because they’re Lebanese is just too non-scientific and mainstream.

After a successful run on the second season of France’s The Voice, the Lebanese candidate Anthony Touma lost in the show’s semi-final to Olympe.

Despite winning the public vote with a huge margin: 59.7% to 40.3%, Anthony Touma only got 15 points out of the 50 allocated to his coach, which seems fitting enough since 35 points was all it took for Olympe to beat out the Lebanese candidate by 0.6 points.

I find the way Anthony Touma lost to be quite fishy. It’s strange how all the other judges awarded their 50 points in a more balanced manner (26-24) except Jenifer who decided to go as lopsided as she did.  And it’s strange that, after having lost the public vote twice consecutively to Olympe, Anthony Touma would come back to win with such a wide margin.

It all feels very calculated and fishy. Perhaps they didn’t want a non-French to win the second season of France’s The Voice?

Either way, my Facebook friends are already on a witch hunt against Jenifer:

I don’t think Anthony Touma is a talent that knows no match. I think he’s slightly overrated but I’m still immensely proud of what he’s accomplished. Good luck to him in his future endeavors though it seems he doesn’t need them. Pascal Nègre, CEO of Universal France, already wants him to sign a record deal.

This is Anthony Touma’s performance at the semi-finals with “Les Mots Bleus” with the results in question (link).

Young Lebanese musician Anthony Touma took it to the stage of France’s version of The Voice – titled in typical French as La Plus Belle Voix – to become the first candidate of the show’s second season that gets the approval of all four judges, causing them all to turn their chairs to face him signaling them wanting him after his rendition of Michael Jackson’s Billie Jean. He was even introduced as Lebanese, his nationality front and center.

Apparently Anthony Touma had attempts at breaking into the Lebanese music scene but they weren’t very successful which caused him to leave the country to France where he pursued the dream. He is now the second Lebanese to be on the show after Johnny Maalouf (link) almost reached the quarter finals last year.

I will update this post when I stumble on a video of the performance that is functional in Lebanon. If you are in France, this will work for you (link).

However, as a testament to how good Anthony Touma was, he trended on Twitter in France minutes after his performance:

And he eventually trended worldwide on Twitter as French people spoke about him him and Lebanese people gushed over how proud he made them: 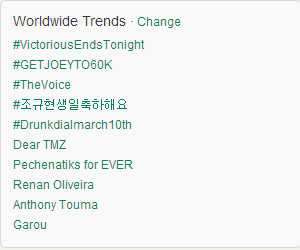 I’m really glad that Anthony got his break into the music business, something he would have never gotten had he stayed here. He now joins a long list of Lebanese shining abroad, bettering our image as a people and making us proud with what they do (link).