Two days ago, Tripoli got hit with death yet again as a terrorist attack took place in its Jabal Mohsen neighborhood.

The politics and intricacies of the attack are many, but there is one story of heroism springing out of the horror that took place on Saturday that no one is talking about. I figured I will, because this particular story about these kinds of people are the ones that make you see that faint silver lining in all the mayhem.

Many have wondered how come a café as crowded as the one attacked in Jabal Mohsen only amounted to less than 10 casualties. That’s because the suicide bombing attack didn’t go according to the two terrorists’ plans.

Among those was a brave, courageous, heroic man called Abou Ali Issa. He was a father of seven. When the first suicide bomber detonated himself, people started gathering at the site. Abou Ali Issa who wasn’t even at the café at the time rushed to the site to see what was happening. It was then that he saw the second suicide bomber approaching the premises to detonate himself and kill much more people than the first one did. The bomber shouted “Allahou Akbar.” Abou Ali Issa rushed at him and tackled him, preventing the bomber from reaching the café, killing the people inside. The bomber then detonated himself, killing them both.

He didn’t care about the sects of those in the cafe. He didn’t care if he was saving the lives of Sunnis, Shia, Alawites or Christians. Abou Ali Issa did not care about his own life as he was faced with a choice most of us would never face: save others or save yourself. He chose the former.

This is Ali Issa’s face. It deserves to become imprinted in our collective memory as a nation. 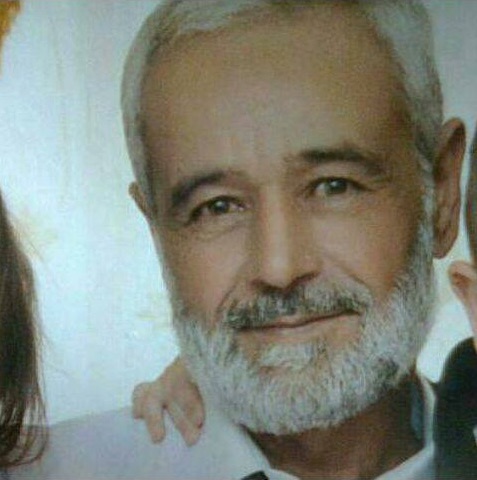 This man who saved hundreds of life will never become a viral sensation. His funeral was broadcast yesterday, along with that of the 7 other people that died with him, on a split-screen on Lebanese TVs, not even worthy of full screen treatment.

Picture via the Beirut Report

In a few days from now, no one will remember that there were two suicide bombers in Tripoli who targeted innocents, let alone the existence of a man who prevented those terrorists from doing so much more harm hadn’t he sacrificed his own life to save everyone else.

Today, there are hundreds of families in Tripoli and Jabal Mohsen who owe their wholeness to Abou Ali Issa. They owe him the presence of their fathers, mothers, brothers, and sisters. They owe him the sheer relief they felt when their loved ones came back home that day.

Abou Ali Issa’s family, his wife and seven children, did not get that same sense of relief and happiness. Their family will never be whole again, and justice for their father and husband will probably never come.

This is my attempt to make the memory of their father and husband that of a national hero, as it should be, as he is the kind of people who deserve to be paraded around as national symbols, as household names who should never be forgotten, because people like him are rare to come by and they should always be cherished and honored and respected.

May he rest in peace. There are fewer people deserving of such peace.

Update: The Daily Star has covered the story here and here.

25 thoughts on “Abou Ali Issa: The Lebanese Hero Of The Tripoli Explosions”