A Saudi Arabian cleric announced via his Twitter account that he’s offering $450,000 to anyone who would kill the Syrian president Bashar el Assad.

The Saudi cleric in question is actually one of the country’s top religious figure: Dr. Ali Al Rabieei. The tweet was published both in English and Arabic. Interestingly enough, the bounty started at $400,000 before he upped it by another $50,000. 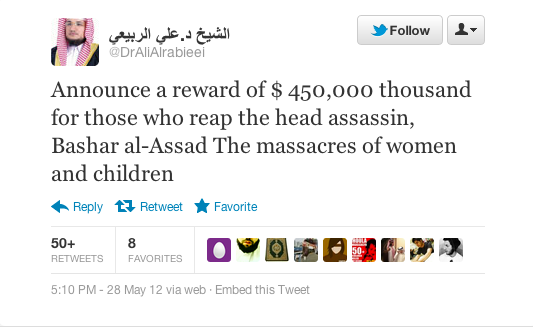 After the Houla Massacre, I have my reservations regarding this amount. But I’m not paying. And I have no idea what’s the point behind something that will obviously lead nowhere except becoming a source for dark humor at a time where no one needs such a thing.