We’ve all used our Twitter or Facebook accounts to communicate with some brands, restaurants and whatnot. The idea of that brand being a few characters away and possibly getting feedback from them is one of those paradigm shifts, at least in Lebanon, when it comes to the relation of companies with their customers. As a result, most of the country’s firms that want to keep up with the time have upped their social media presence and most know that there’s an etiquette with which you should abide, one that doesn’t apply to end users like us.

Patrick Chemali was one of those people contemplating buying a car. He had been considering the new Nissan but didn’t like the ad Rymco, the car’s dealer in Lebanon, had done, as is his right obviously. If you haven’t seen the ad, here it is:

So he took his dislike to Twitter and called the ad lame. Instead of having Rymco inquire more about why he thought the ad was as such in order for them to “improve their services” later on, he was basically told they didn’t care for his opinion while being called an attention seeker. Professionalism much?

Who knew not liking an ad could generate such a response from a supposedly professional firm?

Of course, you won’t find all the above screenshot tweets on Rymco’s timeline now as they have been deleted.

Instead of absorbing a customer who simply did not like the ad, not the car, and tell him that the car was still great or to inquire about what he didn’t like in the ad, Rymco went on the attack and lost him in the process as well as many other clients he would have referred had he received a decent service for the money he wanted to invest in their product. Big mistake.

But maybe they were just drunk on a Friday night?

Update: Rymco apologized and are saying the entire thing was staged with them aiming at bad publicity to get publicity. They’re now offering Patrick a car for the weekend. 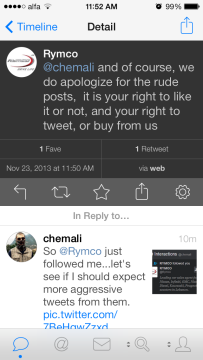 As society advanced, the thought that people can multitask (do multiple things at once) grew even stronger. And it has become a concrete belief of many: “Oh yeah, I rock at multitasking” is a sentence you hear often when someone is asked how they pulled something off.

Well, as my first post in the major I have a degree from, I hate to break it to you but multitasking does not – scientifically – exist.

Don’t cry. I shall elaborate.

Meaning: you cannot drive and read at the same time and be 100% aware of both. You cannot watch TV and study and be 100% efficient in both. One of the two tasks has to go into the background.

When you answer a phone while driving is not an example of multitasking as well. Driving, especially after years of expertise, becomes an automated action (thanks to a part of your brain called the basal ganglia). So you actually drive without putting much conscious effort into it. It is an automated action. Therefore, you’re not really doing two things at once, since only one of those things (answering the phone) requires you to be mentally active.

The brain is very good at deluding itself. Most of you might have closed this tab or browser window in outrage by now, thinking that you are the exception. I hate to break it to you, but you’re not. This is how all of our brains are wired. There’s a limit to the amount of information we can process and the speed with which this processing happens. The brain sometimes gives the illusion that you are doing many things at once by quickly switching tasks, in which case you’re not actually doing all of those things at the same time. You think you’re actually fully aware of everything around you, but you’re most definitely not.

Even while writing this, I’m listening to Adele’s “Set Fire To The Rain” and if I focus on the song, I lose focus on what I’m writing. However, when I switch fast enough between focusing on the song and writing, I get the illusion that I’m doing them both at the same time.

Think about two tasks that require you to be fully mentally aware while doing them: talking on the phone, while writing a paper. Have you tried doing a combination of those? It’s pretty difficult to accomplish writing the paper if you’re busy talking on the phone because the two tasks interfere with each other in the brain, each wanting full attention – and ultimately, you fail at one of them.

So next time someone asks you how you pulled something off, tell them you’re good at organizing your time or something. Do not brag about an excessively powerful mental faculty you do not possess.

It’s no wonder Lebanon has the highest amount of “credible” psychics in the world. It’s a simple manifestation of Darwin’s theory of natural selection. How so? Let me elaborate.

When you drive in Lebanon, you need to have a sixth sense in order to survive – a sense that lets you anticipate what the other drivers around you decide to do so you react accordingly.

What’s the point of using blinkers to signal going left or right? just swerve out of the left lane to go into an alley that branches out of the right lane, which happens to be three lanes away. And you know other drivers aren’t bothered by this because, well, they probably knew you were going to do it.