Earlier today, Crepaway released a new ad to celebrate them turning 33 years, along with their famous tagline: #ComeAsYouAre.

The ad is exactly what you’d expect from the phrase “Come As You Are,” except it’s taken to a whole other level with some Lebanese taboo-breaking as Crepaway features a same-sex couple for the first time ever in an ad made for a Lebanese company. It’s also just in time before Lebanese LGBT NGOs start a week-long campaign to fight homophobia in the country.

Some people might gullibly think that the two women in question are just best friends and brush it off, but it’s far from the case. The voice over says: “And here’s to never hiding your love-bites,” as two women cuddle by the sea, come sunset time.

I was completely taken off guard by them including such a moment. I never expected a high profile company like Crepaway to go there, but I’m glad they did because it raised the quality of their ad’s message so much more.

The ad itself is as “woke” as that moment which is bound to have some people talking in the next few days: it is inclusive, features all kinds of kinds of Lebanese people you’d encounter on a daily basis, and celebrates all those differences that make each one of us, us.

Crepaway, I salute you for the courage you’ve put forth into making and approving such an ad to be how you represent your message in 2017, as you turn 33.

Check out the ad here:

I went with a couple of friends to Crepaway yesterday and figured their new sous-plat is worth sharing with you. For this year’s Christmas season, Crepaway is donating 500LL (33 cents for my International readers) for every tweet containing the hashtag #ChristmasTweet with the mention of Crepaway. All proceeds will go to the Lebanese Autism Society, a charity supporting a cause that many in Lebanon don’t speak about.

You can also order their Christmas Treat dessert which costs about 19,000 out of which 1,000 will be donated to charity.

I made the post’s title as the hashtag to be tweeted on purpose. Every time you share this article on twitter, you will be donating. Give back this Christmas season. All it takes is a click.

Lastly, I would like to thank Crepaway for the awesome gesture and I hope other restaurants follow suit in using Twitter and other platforms to spread awareness to certain causes and tangibly help them.

For those who are fasting and in need of food and those who are in need of good deals for dinner from July 20th to August 19th, I’ve gathered some of the Ramadan offers by select Lebanese restaurants. 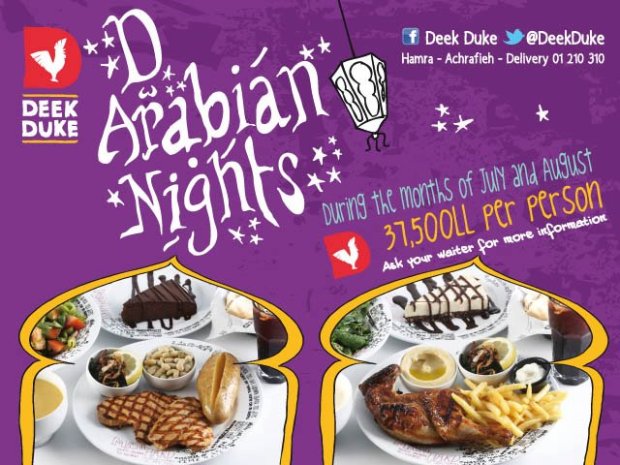 I should be trying the Amarres formule this coming week. If I stumble on other offers, I will update this post. Until then, Ramadan Kareem.

I was overly happy when the Batroun branch of Crepaway made a separate non-smoking area for those of us who don’t like to inhale with their burgers.
However, as I visited the place with friends, I found the area filled with people who were smoking. I asked about it and was told that they had removed the non-smoking area for the day. The explanation? they didn’t want the smokers to be placed on a waiting list for the smoking areas.

Excuse me Crepaway if I wanted to dine without the smell of cigarettes and without that awful stench getting stuck on my clothes and lungs. I mean, the emphysema I am most certainly going to acquire in this country cannot really be compared to the ten minutes of wait that a smoker has to endure, right?

In Lebanon, non smokers are figuratively run over by their overly dominant opposites in society. After all, clean air is something you’re not entitled to in a country where finding hookahs in American style diners is very common and even normal and where non-smokers have become a distant minority, squashed in almost rodent-like manner.

And let’s talk about the pricing! Back in December, the natural counterpart for Crepaway in Lebanon, Roadster diner, boosted its prices by a considerable amount, causing my friends and I to lessen our visits to a place that was eating away more and more an already tight budget. In the meantime, Crepaway boosted its prices in a lighter manner and they remained quite acceptable for what was offered.

However, I was surprised during my visit to Crepaway that they had increased their prices yet again. The famous Spielmozzarella is now priced at about 17,000LBP, about $11.33 and a Chicken Escalope platter is almost 20,000LBP (about $13.33), with smaller portions of French fries and coleslaw.

I understand fuel prices are on the rise in the country but I am positive chicken is not getting more expensive and nor is meat and, well, I am not going to a restaurant to dine on 95 Octane fuel while sniffing on the “exquisite” scent of a Marlboro.