A little more than 12 hours after the release of the music video for her song “Te3ebt Mennak,” the source material behind Elissa’s new music video has been revealed.

The director is Salim el Turk, the man who gave Elissa her previous music video around which similar accusations were made.

The copying is obviously not Elissa’s fault. No one expects her to be familiar with such things. Her director, on the other hand, seems to like getting “inspired” quite often. Or is it the Samsung effect?

Of course, he also gave the world “My Last Valentine in Beirut.” Enough said? That movie is horrible.

This is Elissa’s new music video of a song that I actually like for a change:

And this is the scene that was copied almost to the frame, from an Italian miniseries that aired in 2005 called Dalida:

I think we can safely say this is more than close ideas.

Do you remember that Myriam Klink who goes by queen Myriam Klink of Klinkistan these days has a new song which was released last week?

Well, that song now has a music video to go with it. Lara Kay is definitely jealous and rolling in her kitchen sink right now. Literally. For those who couldn’t go through the song, maybe this would be enough for you to pull through?

You can always mute and watch. It won’t make any difference.

Carrie Underwood has released the music video for her second single (review) off her album of the same title (review): Blown Away.

After a few months of waiting and increasing hype, which culminated in a competition for radio stations for the right to hold a premiere for the music video, the video is finally here.

Overall, one of Carrie’s best. Some of the comments above are merely being nitpicky about the video. But it’s truly, really, well-done.

This was leaked from the fan club party that went on at the Opry in Nashville, a 13 second teaser from the upcoming music video by Carrie Underwood for her song: Blown Away, which I correctly predicted would be the second single off the album of the same title.

The storyline of the video looks like it’ll be what was leaked a couple of days ago:

The video opens with heavy rains. People in town running with newspapers over their heads to their cars, a lady’s umbrella gets turned inside out. The camera is zipping to different parts of the city showing people trying to deal with the storm.

The camera then zooms out of the city down a road to a big farm. It isn’t raining there, but you can see the lightning clouds coming towards the house.

The first verse starts and the camera zooms into the house. There’s an old man laying on the couch, passed out as if he were watching TV. The emergency weather service is is on the TV. Between the TV and the couch stands Carrie. Holding a picture frame and flashlight. When Carrie sings “those storms clouds gather in her eyes,” the camera zooms into her face and her eyes are watering, but she’s not crying. She shakes her head in a disgusted way, looks away from him. At the line “the weatherman called for a twister,” she shuts the TV off and walks away.

The camera goes out to the street and you see the band playing and Carrie is singing “there’s not enough rain in Oklahoma…” It goes back and forth between this and the Carrie in the house collecting all of the pictures off the walls and scrapbooks. You can see the dad still passed out on the couch and the girl walks up the stairs to her room.

When the chorus starts, the camera is switching between Carrie with her band outside (the winds have picked up a bit at this point) and Carrie in her room tearing it to pieces. She’s tearing up pictures of her dad, throwing her clothes, etc.

When the chorus ends and Carrie hits the high “Blown Away” note, the clouds are now really dark, her hair is blowing wildly and a single lightning bolt strikes near the band, tearing the ground up.

As the second verse starts, it zooms back into the girl’s room. As soon as she starts crying, it starts raining lightly outside on Carrie and the band. The winds are still blowing. It starts showing people around the neighborhood running into their cellars, gathering their kids and just kind of panicking. Carrie (the inside one) sees her father still sleep on the couch. She picks up her whiskey bottle and takes a big drink of it and wipes her mouth.

When the second chorus starts, it’s really raining hard and lightning striking everywhere and for the rest of the video, it zooms between the storm progressing, eventually with a tornado touching down right behind the band and ripping up the house and the inside Carrie who is sitting in a chair in the basement with the light right above dangling and swaying as if the house was moving. There are lots of shots of the house be ripped apart by this storm, with pictures flying everywhere etc.

At the end of the song, Carrie emerges from the basement and the entire house is gone, except for an empty couch.

Sounds great, no? Here’s the teaser for you: 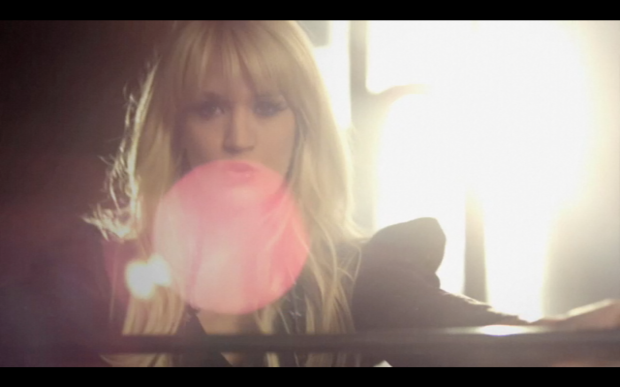 Carrie Underwood has just released the music video for Good Girl (check out the lyrics and my review) and she looks absolutely stunning in it. Playing both good and bad girl, she waltzes through impeccable art direction, many outfit changes and, as I’ve mentioned before, turns up her sex appeal a few notches.

With hints here and there, be it through the dresses or through the flowers (which are a constant fixture in three of her album covers), Carrie is also passing on a subtle meaning that she is moving on to a different direction: the character pulls off the petals from the daisy that was present on the cover of both Play On and her first album Some Hearts.

Some are calling it her best music video yet. Regardless of what your preference may be, this is one of her best, without a doubt. In fact, the professionalism of this video is giving me hope that this album round will not be another color by number era for Underwood. She’s actually trying her best to make it count – and it clearly shows.

The video is also very fast paced, similarly to the song, making it quite fitting and it will surely help Good Girl to become a bigger hit than it already is. And with Underwood hinting that it may soon rival Before He Cheats as her biggest hit, this video will contribute to any crossover attempt the label may be working for.

Carrie Underwood has probably turned up her sex appeal a whole notch with her Blown Away era. After a fiery first single in the form of Good Girl (read my review here), she’s set to release the music video for the song as an Entertainment Tonight exclusive on Monday, March 12th.

And it doesn’t end there.

Starting today, March 9th, VEVO will begin to promote the music video with never-before-seen footage from the music video shoot. The video will be released to iTunes on Tuesday, as well.

I’ll be posting the video the moment it becomes available. However, for the Carrie and country music fans that read my blog, here are two pictures that will get you by until Monday.

The first one, the sexiness of which I cannot get over, is absolutely stunning.

The second one is highly reminiscent of the music video for Carrie’s lead single off her previous album, Play On, the hit single Cowboy Casanova:

And with the director of this music video being Theresa Wingert, the same woman who directed the Cowboy Casanova video, it looks like Carrie’s team is basically revamping the whole Cowboy Casanova cycle with a stronger video, a stronger song and stronger promo.

The pictures give me a good girl/bad girl feel for the video. I have to say, I’m quite excited.

The awaited video of country music’s most anticipated single of the year so far has just been released.

Set in a desert around sunset, it features Brad Paisley with his guitar and Carrie Underwood with her legs. Yes, the legs are even more important than the guitar. Why? Well, they say pictures speak louder than words. How about three?

If you’re still with me, let us proceed.

The treatment of the Remind Me video is different from what anyone expected. Sure, our expectations were high but the more reasonable person of us would have seen coming something along the lines of the result. There was no way Carrie Underwood and Brad Paisley would act out the song to the letter.

I mean, if you thought that the whole video would be Carrie and Brad kissing each other endlessly, then you would be delusional. No offense that is.

The end result was the next best thing that could happen without acting out the song: represent the anguish of two lovers who need to be reminded of each other’s love with Carrie and Brad walking towards each other in the desert sunset.

The idea couldn’t be simpler. The slow walk represents the longing, the desert represents the dryness of the relationship. And when they meet, they address each other with sparks in their eyes to be reminded of that love.

However, you can clearly see that Carrie expresses more passion than Brad in their portrayal of the characters. I don’t want to be over analytical, but I think that’s the role they were meant to play and not a lack of acting or dedication. Why? Because I believe that it is more natural for women in situations like this exhibit more passion while men have more restraint.

I can’t say I’m let down but I can see why many fans thought the video would be much more exhuberant. However, let me say this. If any man has a wife/girlfriend with Carrie Underwood’s legs and they need to be reminded to love her, it’s time to go to therapy.

Check out my review of Remind Me. And the lyrics.

Watch the Remind Me video: