In such times, a laugh is needed every now and then and I hope the content of this post entertains you as much as it entertained me when I saw it.

New to the Lebanese internet scene is an Instagram account (link) and Facebook page (link) called Kawalees Beirut. Caline Kajouni, a friend of mine, and with the help of two of her friends: Taline and Patrick, decided to re-create many of the scenes we’re exposed to as Lebanese and put a twist to them.

What if, for instance, you could take a jab at all those Lebanese series where people are in makeup and cocktail dresses all the time even when they go to bed?

What if you could do to that friend who’s stealing your fries exactly what you had in mind as you saw their fingers slither on the table towards your plate?

What if you could do to that doctor who doesn’t listen and wants to compensate for all his years of not making money exactly what you thought of as they wrote you a panadol perscription?

The trio try to answer such questions of our lives and more in extremely funny and short videos that they’re posting on their pages.

My favorite is by far the one about normal Lebanese versus Lebanese in series waking up from sleep:

Normal people waking up VS Waking up in Lebanese TV series.

Another hilarious one is what happens when you step on a Birkenstock, which is admittedly much more painful than stepping on anything else:

Whoever said stepping on Lego is painful never stepped on a Birkenstock. Featuring @vkurumilian and @hrag10

Or how to handle the latest heat-wave we got:

When there's a heat wave in Lebanon.

Or when you have a friend who never shuts up (guilty as charged):

That annoying friend that just keeps talking and talking.

Or when you don’t wanna give your car to the valet parking service:

That friend who always refuses to give the car to the valet.

Or when pesky Arabic tirashrash music wakes you up from your Sunday nap:

When you're trying to nap on a Sunday afternoon and this happens.

Or when your friends are trying to converse at a bar:

Your reaction when someone's talking to you in a pub and you can't hear a thing.

There are many more videos where those came from. You can check out their Instagram page here and their Facebook page here. They’re already up to over 3500 followers between both pages so you know they’re up to something really good.

This is the kind of comedy that I think we need more of in this country: something not cliche, full of humor and with a sarcastic take on our daily lives. Lebanese comedians, take note: three people who have nothing to do with your field are giving you a few lessons.

I’ve finally found a funny movie this year! While this isn’t absolute movie brilliance as I’m sure no one really expects it to be, it has enough hearty laughs and fun scenes to be worth a trip to a theatre near you if you want to watch something along such lines.

David Clark (Jason Sudeikis) is a drug dealer working in Denver who finds himself in trouble as his stash and money are stolen by a local gang. He is then coerced by his local drug lord Brad Gurdlinger (Ed Helms) to pick up a “little” marijuana from Mexico under the name of a Mexican drug lord for which he’ll get paid $100,000. In order to get past border control easily, David devises a plan that involves hiring a stripper named Sarah (Jennifer Aniston) and two local kids, a runaway teenage girl (Emma Roberts) and a virgin teenage boy (Will Poulter) to play a fake family called the “Millers.”

The movie’s greatest asset is the ease with which its cast work together. All four main actors play off each other with ease and charm. The movie may be a tinge too long but it’s carried by the cast and there are enough funny moments and memorable scenes here to keep you going. Make sure you stick through the credits for one of the movie’s best scenes though, especially for fans of the TV show Friends.

Of course, the way the plot unravels is predictable. Don’t get your hopes up for an out-of-the-box resolution. We’re The Millers may not be the risky comedy type that is expected out of comedies these days, but at least it’s funny – it is a typical Hollywood comedy but in a year that has not seen any decent comedies, it’s somewhat refreshing for the Millers to finally show up.

Lebanese comedian Mario Bassil is a participant on LBC’s Celebrity Duets, a show that serves as a fundraiser for a celebrity’s charity of choice while they “sing” for votes.

Mario Bassil is still in the competition and his performance yesterday was his own version of Gangnam Style which he called “Yalla Mario Style.”

I never thought that after posting about Myriam Klink yesterday morning that I’d come back home in the afternoon to find that post with hundreds upon hundreds of hits and Klink all over the place.

It was funny at first. Comedian Nemr Abou Nassar picked up on it and started picking on Myriam via twitter who didn’t let him down and actually replied.

The following are some of Nemr’s tweets:

And some of Myriam’s tweets:

The past month or so? A distant memory. No. The only thing wrong currently is Myriam Klink’s song.

Sure, it’s a horrible song. It’s something that shouldn’t even be put on airways. But that didn’t stop many “singers” before Myriam Klink from releasing songs and eventually not making it. The only artist that “made” it with a sultry attitude is Haifa Wehbe. And even she knows her show is less about her singing and giving art than about actually giving a show.

Nemr Abou Nassar will be using Myriam Klink as a much-needed source of jokes in his upcoming comedy shows. He even has one scheduled for tonight and, surprise surprise, it’ll be all about her. On the other hand, Myriam Klink’s video jumped from 1000 views on youtube yesterday morning to over 26K today. Her twitter followers have also doubled overnight to about 2000. I’m getting referrals to my blog from people googling her name.

She has officially made it.

And yet, people don’t seem to let go. I’ve never had a subject burn on me as fast as this. In the past 24 hours since Myriam Klink was first exposed, she exploded with such a magnitude that any Myriam Klink related tweet today is causing me nausea. People have nothing better to do?

So for all matters and purposes, leave Myriam Klink alone and she’ll get back to what she does best all by herself. As for everyone else, here’s how it should break down.

You like the song? Then listen to it with your earphones on as much as you want.

You hate the song? Then express your hate without calling Myriam Klink the stupidest person that has ever walked the Earth. She actually has a biology degree, if that proves anything.

You hate Myriam Klink? I don’t see why you should. But if you do, then fine. Just don’t let me know in every single waking moment that you consider her an abomination.

You like Myriam Klink? She sure is lovable. And you’re so rare that I’ll give you a free-pass for now. But if you’re gonna shove her down my throat…. Never mind, you can do that as much as you want.

The whole point is: when it comes to Myriam Klink, enough is enough.

Update: Nemr has had a radio show in which he had a 30 minute rant about Myriam Klink. Check it out here. 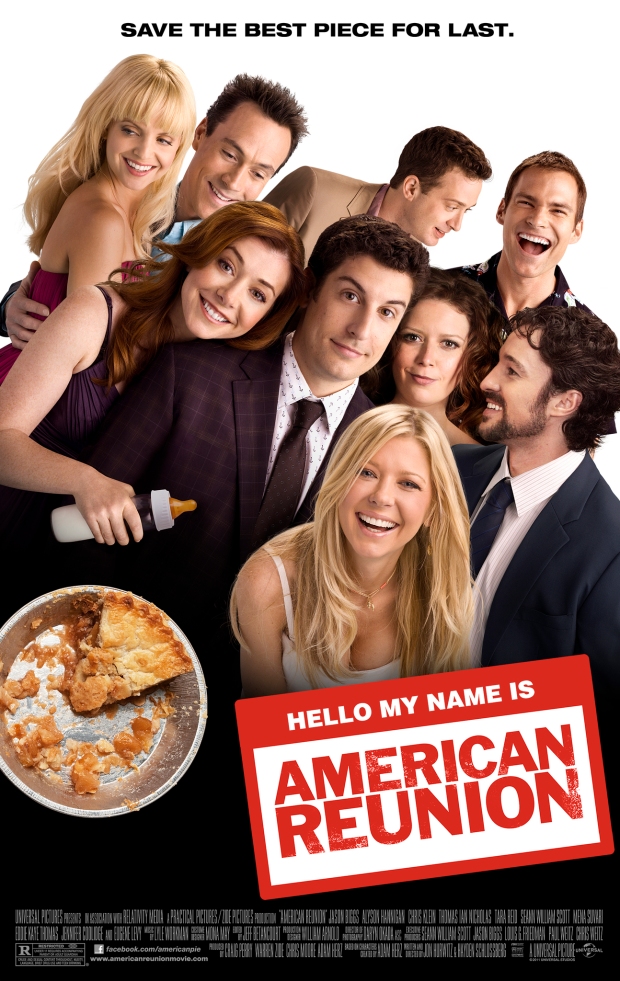 Almost 10 years after the last American Pie movie, the original cast is back for their high school reunion, 13 years after graduating – and all the characters have grown up.

Jim Levenstein (Jason Biggs) & Michelle (Alyson Hannigan) are still married and are now parents to a two year old boy. Their sex life, however, is in a rut and they’re trying to rekindle their romance.

Oz (Chris Klein) is now a hotshot famous sports anchor, dating a model who’s too out there for his taste. And he hasn’t gotten over his first love Heather (Mena Suvari).

Kevin Myers (Thomas Ian Nicholas) is now a work-from-home architect, married to a woman named Ellie. At the reunion, he’ll be tormented by feelings for his first love Vicky (Tara Reid).

Finch (Eddie Kay Thomas) is supposedly a man going on worldwide adventures – from Europe to South America, via Dubai and China.

On the other hand, Steven Stiffler (Seann William Scott) hasn’t done much growing up in the past 13 years. Stifmeister is still as is.

As the original characters go back to East Great Falls, they’re struck by how things have changed, and somehow how so much is still the same. The kid Jim used to babysit is now a young flirtatious woman trying to find the right man to lose her virginity to. The jocks are still jerks. In a way things are very similar to how they were – there’s one catch: they have grown up.

The opening scene sets the tone. American Reunion is hilarious. Yes, it’s cheap comedy. Yes, it uses sex to make you laugh. Yes, it’s inappropriate at times. But you just can’t stop laughing during that movie. Call it lame, call it useless, call it a silly relaunching of a franchise, it still does what American Pie does best: deliver a raunchy comedy.

The best thing about American Reunion is that it doesn’t straddle the lines of sentimentality as some franchises tend to do after a long absence. Instead, it keeps going at you with the same formula that made the first three movies successful: sex jokes, raunchy attitudes, lude behavior, nudity, awkward parent-son conversations. It is formulaic in a way, but no one expected it to be otherwise. Some of the jokes may have been done before, such as Jim’s masturbating scenes and talks with his father that divulge way too much information – you know such scenes are coming but you can’t help but laughing when they do.

How I Met Your Mother fans will be happy with a cameo appearance by Neil Patrick Harris. Fans of the “Stiffler’s mom” storyline won’t be disappointed as well, as Jennifer Coolidge makes an appearance. Many secondary characters are also given their own moments to keep you entertained.

People change, priorities get reshuffled, relationships get rearranged – but American Reunion sets to show that true friendship stays. And for one weekend, those friends will say “the hell with growing up” and have the time of their life, one last time. If you’re a fan of the first three movies, then American Reunion is definitely for you. Even if you haven’t watched any of the first American Pie movies, you won’t go into this not getting what it’s about. The characters that were desperately trying to lose their virginity 13 years ago have come a long way, and yet in a way have gone nowhere at all. This is one reunion worth attending.